Lets give thanks for this remembrance of the dignity and elegance of language in Australian early politics as a jibe in the debate on an early Australian Constitution based on the big end on of SydneyTown.

A ‘Greg Hunt’ (i.e. Wikipedia) on the internet reveals that, known as ‘the boy orator’, Daniel Deniehy was an advocate of extended democracy in the emerging political systems of the Australian colonies. He joined the opposition to the 1853 New South Wales Constitution Bill, which would have created a powerful unelected upper house and limited the franchise for the lower house to those owning substantial property.

So much of his speech is ‘plus ca change’ in relation to the current Government’s attitude to the average citizenry at the moment with the Leader’s latest ‘captain’s call’ to re-establish royal honours.

And being in a figurative humour, he might endeavour to cause some of the proposed nobility to pass before the stage of our imagination as the ghost of Banquo walked in the vision of Macbeth, so that we might have a fair view of those harlequin aristocrats, those Australian magnificos. We will have them across the stage in all the pomp and circumstance of hereditary titles. Here they all knew that the common water-mole was transformed into the duck-billed platypus; and in some distant emulation of this degeneracy, he supposed they were to be favoured with a bunyip aristocracy. But though their weakness was ridiculous, he could assure them that these pigmies might work a great deal of mischief; they would bring contempt upon a country whose best interests he felt sure they all had at heart, until the meanest man that walked the streets would fling his gibe at the aristocrats of Botany Bay.

Perhaps we could create a modern designation for current and former politicians as an alternative to ‘, Lord or Sir as who can be the Best Count’. Daniel Deniehy’s headstone records a prescient message where old words are rewritten in the reading.

The vehement voice of the South Is loud where the journalist lies But calm hath encompassed his mouth, And sweet is the peace in his eyes. 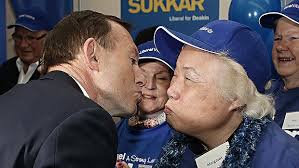 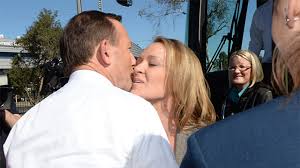 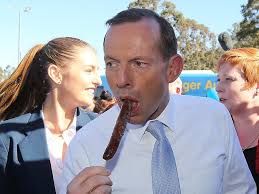 It was raining heavily in Canberra on Wednesday so, after question time, Julia Gillard walked the corridors back to her office rather than cut across a courtyard as she usually does.

As she strolled past opposition MPs’ offices, Christopher Pyne and Joe Hockey, like two schoolyard ne’er-do-wells, trailed about 10 paces behind, heckling. Hockey was bellowing the Engelbert Humperdinck lyrics: “Please release me, let me go, ’cause I don’t love you any more …” Pyne, doing his best to affect a menacing gravitas, was taunting repeatedly: “You’re drowning Julia, not waving, you’re drowning.”

By any measure, it was disrespectful behaviour towards a prime minister but Gillard, whose government has plumbed record depths in unpopularity, is getting used to such treatment and ignored her tormenters.

Apparently, there is soft-core and hard core material within the realms of internet experience, however, when it comes to questioning  Tony Abbott why-I-am-the-Prime-Minister on 2GB as the first ‘in-depth’ interview for 124 days,  it seems a feather duster has been waved over him by the ‘ju-ju-journalist’?

“It’s the hipocritical that does my head in. Pyne was the the first to call, and continued to call Julia Gillard a liar in relation to the carbon tax. Now he betrays himself as  one of the most bald faced, self aware and strategic liars in recent political history.”

“There will be no change to school funding under the government I lead.”