“It’s the hipocritical that does my head in. Pyne was the the first to call, and continued to call Julia Gillard a liar in relation to the carbon tax. Now he betrays himself as  one of the most bald faced, self aware and strategic liars in recent political history.”

“There will be no change to school funding under the government I lead.”

“I think it is important to keep the challenge of climate change in perspective although I have been accused and continue to be accused of being somewhat of sceptic on the issue, the truth is I’m not that sceptical, I think the weight of scientific evidence suggests that there are significant and damaging growths in the levels of greenhouse gas emissions and that unless we lay the foundation over the years immediately ahead of us to deal with the problem, future generations will face significant penalties and will have cause to criticise our failure to do something substantial in response.”

And in June 2007,  announcing the details of the scheme he intended to introduce by 2011 if re-elected, he said: “Being among the first movers on carbon trading in this region will present new opportunities for Australia. And we intend to grasp them.”

“Tony Abbott now has the great responsibility and honour of being PM of Australia because a little under four years ago he challenged what seemed to be a political consensus on global warming; won the leadership of his party by one vote; had it expressly confirm a change in its policy on the issue, and then confronted the incumbent government on global warming, with quite dramatic results…. 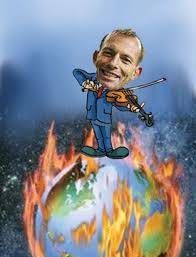